What a busy girl I was this weekend! Most of the weekend was filled with getting stuff ready for the baby, but I feel so much better about what was accomplished.


First of all, 20 weeks!?! Where has all the time gone! I cannot believe that I am already halfway done with this pregnancy!

We planned to register on Saturday. I wanted to take my mom, because, honestly, I didn't know much about what exactly we would need. My mom knows tons about babies, so I figured she would be the best person to take. Once we got to my new favorite place (Babies R Us) she realized that there are so many new gadgets and other things that were never around when we were little. We had so much fun! It was an exhausting day. We were there for a really long time, but there were a lot of things that I had already done some research on, so that made things much easier. Plus I have been to Babies R Us about 50 times in the last month, so I know a lot about what they have. So 3 hours later, we finally left the store, and I got away without buying a single thing this time! YES!

Yesterday was supposed to be the day that Tony and I went back to finish up the registry and add anything we forgot. Tony decided that he had a lot of stuff to do around the house instead, so while he busied himself packing up things in the garage, my mom and I took off in search of Braysen's bedding. We were having a really hard time finding a bedding set that we liked. The first obvious choice for a boy is a sports-themed room, which was quickly vetoed. While Tony is into sports and everything, we decided we wanted something a little different. I'm really not into all of the animals and other things they have for baby boy bedding. Some of the little girl stuff is really cute, but when it comes to the boy stuff, the boy stuff is really lacking. This doesn't just go for bedding, this is for clothes, shoes, etc when it comes to boy stuff. Everything has monkeys, lions, turtles, giraffes, teddy bears, or something else really dorky on it. We just wanted something really simple, and not too busy, but we couldn't find a bedding set that we were really happy with, and this was after a 2 month internet search. We found a place that does custom bedding, so my mom and I checked it out yesterday. The pricing was much more reasonable that what I thought it would be, and we got to pick the fabric and style of the bedding. They make everything on site, and it should be ready to pick up in about a week or two! Also at the store, Grammy picked up a piggy bank for Braysen's room. 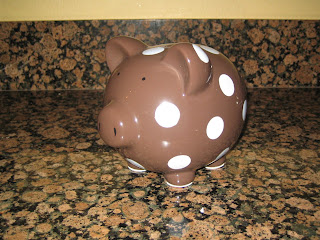 On the way home, we stopped at a couple more places. Tony and I had already purchased the lettering for Braysen's room, but my mom and I picked up the supplies to actually decorate the letters, so I started on those last night.

We also found this little tiny onesie that i just had to buy! 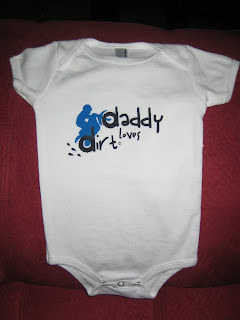 In reality, this onesie could say "Uncle(s) love dirt", "Grandpa(s) love dirt", or "Great Grandpa(s) love dirt". We've got dirt bike riders coming from both sides of the family! So while I have been fighting the people that say this kid will be on a dirt bike before he is 5 years old, I think I have come to terms with the fact that it is inevitable. Much like my brother, my child's first big Christmas gift will probably be a motorcycle. SIGH.