Braysen has recently become obsessed with the mobile in his Pack n Play. He loves it when we crank it up and he can watch the bears turn around in circles. In fact, this morning, I woke up to him making noises at it and kicking his little feet a mile a minute, and we didn't even have it turned on!


My mom has the same Pack n Play at her house, and my brother decided it was a good idea to change out the babyish teddy bears to something he thought Braysen would enjoy a little more. And he did! 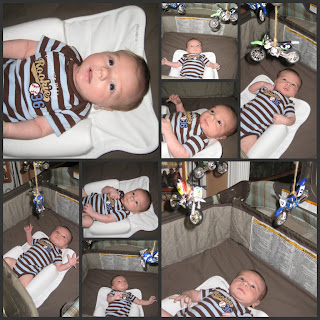 Posted by Amy Schuler at 11:16 AM No comments: Links to this post

This onesie says it all: 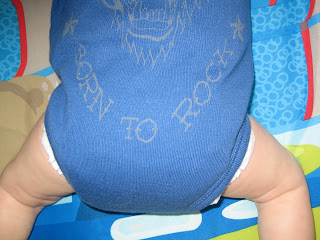 We had a busy day today! It started off with a new hairstyle. Daddy apparently didn't like Braysen's previous "do", so today we gave him a mohawk. Tony came home to find this on our couch, but he wasn't to happy with this hairstyle either! :) 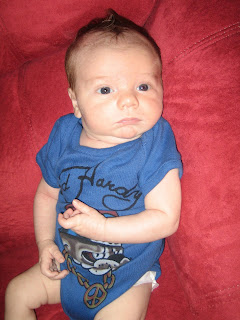 After that we spent some time playing.

Braysen was tired, so he took a nap for the first time in his crib. He slept for a good 40 minutes! I was really excited, because I got the chance to finally eat my lunch that I had already reheated several times and attempted to eat three times. I also had time to take a shower and do my makeup before he work up and was ready to be entertained again. He's gotten to a point where he is very social, so he doesn't like to spend very much time alone when he is awake. He would rather be held, played with, or talked to, so that's what I have been doing for most of my days lately. 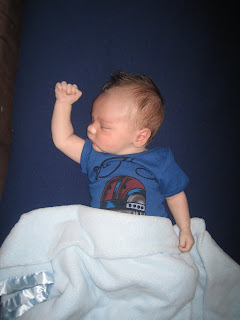 Then we drove to Corona so that Braysen could meet his new buddy Landon, who is only 3 days old! 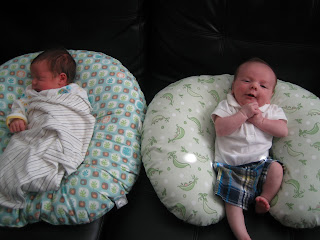 After that, we saw cousin Shay off to his Prom, and then hung out with Grammie, Great-Grandma Pat, Aunt Jennifer, Aunt Stephanie, and cousins Kylie, Dylan, Michael, and Mark. 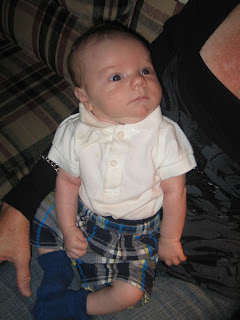 Posted by Amy Schuler at 12:22 AM No comments: Links to this post

You are my sunshine... 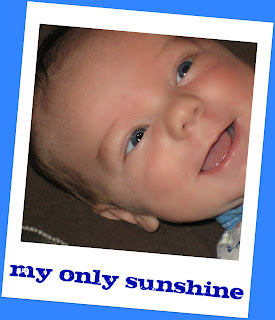 Posted by Amy Schuler at 11:46 PM No comments: Links to this post 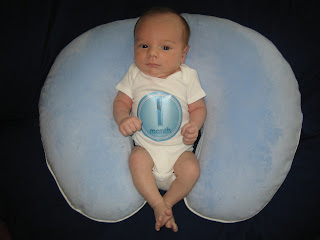 Posted by Amy Schuler at 1:24 PM No comments: Links to this post

Everybody that has held my little guy in the past week has told me that he has become such a little wiggleworm and that he is so hard to hold. The last two mornings I've woken up to find that he's wiggled his way to the other end of his bed. He also oftentimes will find a way to free his arms out of his swaddle blanket. Well, what he did this morning takes the cake!

While I was getting everything ready for his bath, I had him laying on his Boppy Lounger. I was on the phone and needed to get a diaper, so instead of yelling for Tony to get it for me, I walked into the other room to grab a diaper. I was gone for not more than 30 seconds. When I came back into the room, this is what I found: 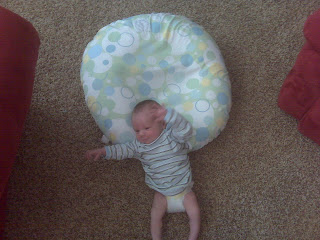 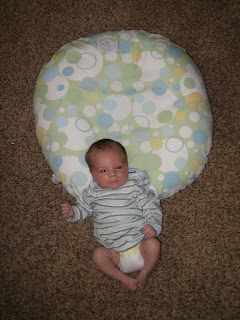 Somehow this little stinker managed to wiggle his way off of the Boppy and onto the floor. My mom told me that we'd better get our running shoes ready!
Posted by Amy Schuler at 12:07 PM No comments: Links to this post