Yesterday I got a head start on making Braysen's baby food. He will be 4 months this week, so he gets to start solids! I originally didn't plan on actually making his baby food. Who does that?! Really, though, I didn't know anybody who'd ever done it before, and actually had never even thought about it.

I read on Valerie's blog that she planned to make Sawyer's baby food. I'll be honest, I thought she was a little nuts! :) Who in their right mind would spend the time to make baby food when you can buy it already prepared? And when I priced it, it didn't seem expensive. But once I started doing some research, Tony and I decided that we wanted to try making Braysen's baby food. When you think about it, our homemade baby food will not have any preservatives or sugars added. As an added bonus, it turns out that it is actually a lot more cost effective to make than to buy. 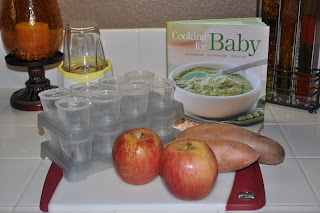 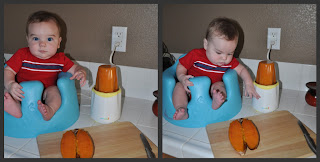 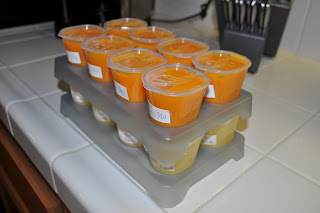 I was able to make 16 containers of food from about $3.55 worth of sweet potatoes and apples. Do the math, it comes out to a little over 22 cents per container. So it's better for him and it will save us money? I'm sold!
Posted by Amy Schuler at 5:34 PM