* I typed this post last week on Monday. As you can see, I forgot to publish it and didn't even realize it until almost a week later. Yes, we had a rough week. :)

Yesterday was the day we were supposed to start our new schedule. I had a special time built into that schedule to blog. Obviously I didn't blog. We had a rough night on Sunday, which turned into a rough day on Monday, so the new schedule went out the door and we just worked in survival mode for the day. Yeah, it was that bad.


Back to our fun happenings last week. We had a play date with the girls last week. And by "with the girls" I literally mean all girls: Marlo, Emery, Valerie, Sawyer, Vannessa, and Brooklyn. Braysen was definitely outnumbered again. Don't worry about him, though, I don't think he's afraid of any of these ladies. Marlo made the comment before we came over that she was worried that Emery would hurt one of the younger babies because she is older and very curious. I joked with her and said that Braysen's arms are so strong and out of control that he could probably handle himself. 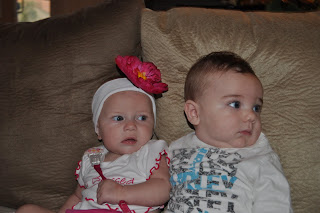 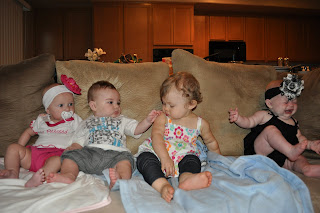 And so he did. We tried to get some group shots, but it wasn't until right before we left and all the babies were tired and ready for bed. As we were each talking to our babies and trying to get them to smile, or at least not cry, for the pictures, Braysen got more and more excited. The more excited he gets, the faster and more out-of-control his little arms get. Before too long, he was whacking poor Emery in the back with those flying fists. 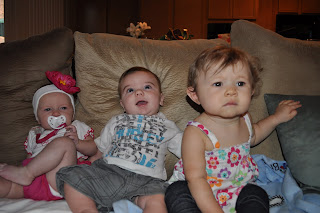 It was then that he spied the straps to her shirt. He just can't resist a good swimsuit or spaghetti strap. He gets his fingers wrapped around that little piece of fabric and holds on for dear life. So after he pommeled Emery, he the aimed and caught hold of her shirt. Poor thing, she didn't know what to do. 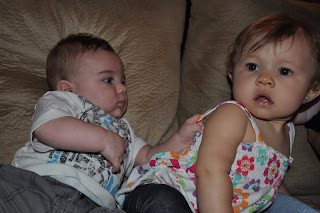 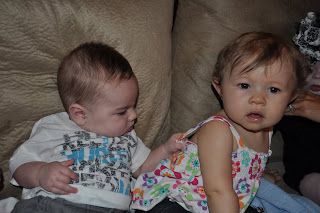