or handsomely you'd say, because he's a boy!

When I went to pick Braysen up at my mom's yesterday, she told me that when she went in to get him from his nap, he was sitting up in the Pack n' Play. I thought she was nuts and was just exaggerating.

As it turns out, she wasn't lying! I set Braysen on his blanket today so I could unload a few Target bags from my car. When I came back in the house, THIS is how I found him! What the heck!? I tried to take some quick pictures, because he's not REALLY sturdy yet, and it makes me nervous because I'm afraid he'll tip over. 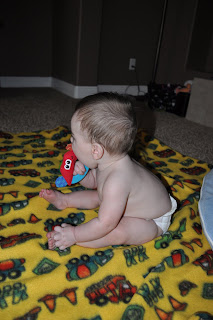 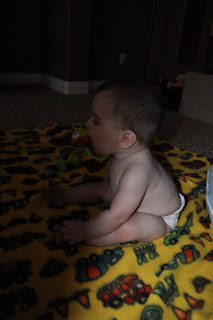 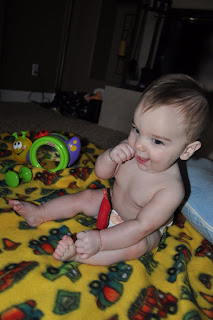 And yes, he was tipping over in this last picture. And yes, I did catch him before he hit the ground!
Posted by Amy Schuler at 10:55 PM