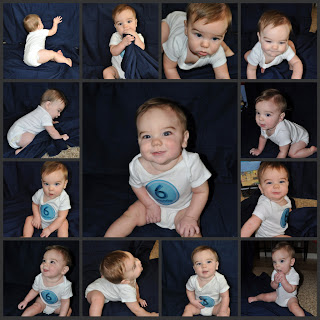 Again, as you would suspect, Braysen was extremely uncooperative during photo time today. I think the older he gets the more uncooperative he becomes! He was rolling around, putting the backdrop in his mouth, trying to grab the camera, trying to crawl. He's figured out that if he lunges hard enough, he can move his body forward and can sometimes use his legs and arms together to move one "step" forward. He still hasn't completely figured out how to coordinate his arms and legs together. Thank goodness for that!

He got a really fun gift for his half birthday, but I'll blog about that some other time.

On another note, our sleeping situation as gotten MUCH better! Our night sleeping situation, that is. Daytime naps are still few and far between, and really short when they do occur. I've been hesitant to bring up his better sleeping habits, as not to jinx myself, but he sees the doctor this week and will be getting shots, so I'm assuming I'll be back at square one again after that anyway.