*After I posted my "Ketchup" blog, I found this one saved as a draft. I typed it on the 21st, but I don't even remember typing it. Wow, I need more sleep!!*

We've had a lot happen in just the past few days. Braysen started crawling on Sunday. I was very unprepared for this. Everybody kept telling me it was going to happen soon, based on things he was doing, but I thought he was too young. I was also expecting him to start with the army crawl like many babies do. Of course not, he's is crawling, on hands and knees. I still am not ready for this. As much fun as it is that he is less frustrated because he's more mobile, he's now trying to pull himself up on everything, which is scary!

Those first two teeth finally popped through. They've been very indecisive. Some days I swear he's teething, and other days he seems fine. After about a month and a half of this, we finally have two teeth.

Sleeping has not been much better. He just doesn't want to sleep. I know he's tired, because during the day I sometimes find him like this. 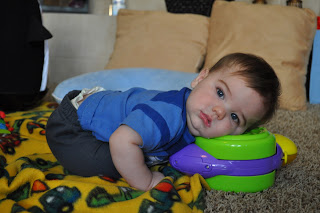