Braysen has become increasingly active. We went to Desiree's baby shower on Saturday. We had a ton of parties to go to and this was our second stop. I didn't get any pictures, because it is so difficult to just have him there with me, aside from eating, socializing, anything like that.

Kristen tried to play with him, but he gave her a run for her money. When she bent down, he pulled himself up on her knees. Within the next ten seconds, he managed to pull down her top, grab at her necklace twice, and then steal the cookie out of her hand. It seemed as if every time she tried to stop him from doing something, he already had his next move planned out! Needless to say, she didn't dare try to play with him again after that!

Then he moved on to Emery. He proceeded to try and put his hand up her skirt, then was scaring her with his new voice noises he's been making.
Aaand, because I have so much free time on my hands and often find myself very bored (haha), these are the blocks and the hooded towel I made for Little Miss Bostyn. 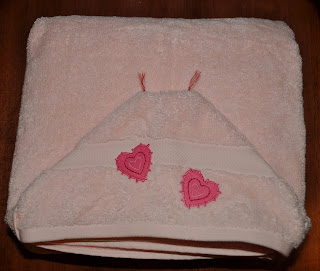