Lots of new posts today! I shouldn't be on the computer, because I have a ton of projects and assignments to grade that I've been putting off. I did do a little grading tonight, so maybe I'll just consider this a break :)

I want to start out by saying that I am not a healthy eater and am actually quite picky. Mainly vegetables. I know I sound like a little kid when I say this, but I hate vegetables! When Tony and I decided we were going to start trying for a baby, I decided to revamp my diet. I wanted to be eating really healthy foods when I was pregnant, so I decided the best time to start would be before I was actually pregnant. I stocked up on veggies and stocked my recipe box with lots of yummy-looking recipes for veggies. It lasted about a week. I found myself literally gagging down the food while plugging my nose. And Tony? Well, he's actually pickier than I am with most food, so he never even touched it.

I'm very sad to say that I wasn't able to continue with the veggies. Braysen, however, will pretty much eat anything you put in front of him!

Now that he's eating our food, I know we need to start eating healthier and include veggies, but Braysen will be the only one eating them, which is OK with me.

But, I got a recipe for a "healthy" mac & cheese. It's considered "healthy" because it's made with whole wheat pasta and there's butternut squash in it. An advisor that I work with at my school (her daughter is actually in one of my classes) was going on and on about this recipe and how good it was and how all her kids loved it. So one day in class, I asked her daughter and she raved on and on about it. So tonight was the tester.

It was actually pretty good! Tony actually went back for a HUGE second helping, but when I tried to sap a picture of it he got mad and tried to toss a chunk of chicken in the way of the shot. 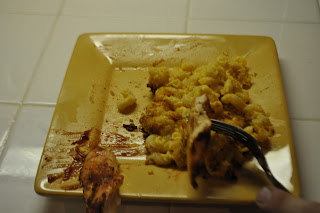 I obviously did not tell him that the butternut squash was in the dish or he never would have even tried it. Much like when I puree onion to add to recipes because he refuses to eat anything with onion in it, only to have him tell me how good it was...