For the Jackson's Superbowl Party, I made cupcakes. They were based on a cake that Tony's Aunt Jeri made one year for Christmas. You can find the recipe here, on Tony's cousin Steph's blog.

Anywhoo, the name of the cake is "Better than ____" cake (I'm not putting the real name because I know for a fact I have at least one student who reads this blog...Hello Makenna!!). Since I'm not too fond of the name for the cake, I will call them Hanky Panky Cupcakes. Much better! :) I copied and pasted a majority of her recipe then highlighed my adaptations.

I followed Steph's recipe, but made a few changes:

1 box German cake mix bake cake as directed in a 13 x 9 pan - I baked 2 dozen cupcakes instead
After baking while still hot, punch holes all over the cake using a fork, knife, skewers- whatever.
Pour over the hot cake 1 can sweetened condensed milk and 1 jar caramel ice cream topping - I heated and mixed together the sweetened condensed mink and the caramel topping on the stovetop before I poured a little over each cupcake.
Let the cake cool.
On the top of the cake spread 1 (12 oz) tub of cool whip and sprinkle chopped Heath bars all over (3-4 candy bars) - I made my own whipped cream frosting to pipe on top of the cupcakes. Recipe is below.
Refrigerate until ready to serve.

Combine the cream cheese, sugar, vanilla extract and almond extract in a large mixing bowl or the bowl of a stand mixer. Fit the mixer with the whisk attachment and mix on medium speed until smooth. While the mixture is still whipping, slowly pour in the heavy cream. Stop and scrape the bottom of the bowl a couple of times while you continue whipping until the cream can hold a stiff peak.

I'm not a huge fan of chocolate, or even cake for that matter (yeah, go figure!), but everybody at the party seemed to love them! 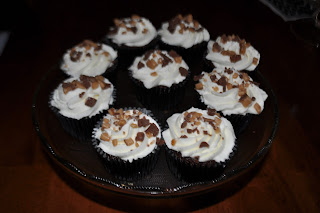