My first cupcake cake pops were a disaster, but after a little practice, the 2nd ones were a little better. I had a fellow cake friend recently tell me about a place in Temecula that sells cake pops. When I looked at their pictures, it was clear that they used a mold to create the "wrapper" for the cupcakes. I did some research and found two molds that I liked. I went with my least favorite first, and will hopefully try out the one I really like very soon. Using the mold was so much easier than trying to shape the "wrapper" part with a cutter. It also made it much cleaner-looking after it was dipped. I also found some round red candies that I like much better for the "cherry" than the red M&Ms I was using. 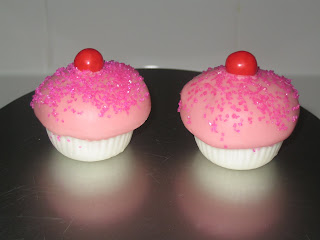