Learning as I Go

Lately I've been getting a lot of fb messages and texts asking about how I do some of my cake pops or other things. People have asked how I get my cake pops so round. Quite honestly, I don't know what the heck I'm doing. I learn by doing and practicing, practicing, practicing. Often, when people ask me to make something for them, I will usually do a test run before I will tell them yes. One example of a cake pop I wasn't sure I would be able to pull off are the Blue's Clues cake pops. The test run worked beautifully the first time, except for the fact that the paws were dipped in red candy coating instead of blue (I did the test run the same day I made the mushrooms for Sawyer's cupcakes, so red is what I used!) For cake pops in general, I get a lot of information from Bakerella's website. Then from there, I practice to see what works best for me. My cake pops were NOT so round in the beginning, but with practice they get better. I don't usually post the pictures of my practice work, just because it is very embarrassing to somebody like me who is super self-conscious as it is. But I decided that maybe I should start posting some of my practice pictures.


I got an email from a friend who first asked if I would do her wedding cake. After I told her no (I've had to turn so many brides down, I just don't think I'm ready for a wedding cake) she suggested that I make some cake pops instead. After giving her a list of ideas I had, I was very confident I could do all of the ideas except for one. So I did a test run, and it was a disaster!

The idea was to make little wedding cakes. The cutters that I used to mold the pops were clearly the wrong sizes and I didn't refrigerate the cake long enough so that my edges stayed sharp. More practice very soon! 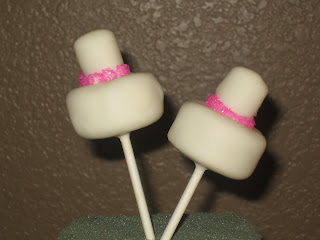