I shouldn't be blogging. I should be finishing up grading papers, or prepping the materials for the project my class is doing tomorrow, or packing my lunch, or finishing up the 4 other blogs I've started but not finished yet.

Oh well. This is super-bloggable, and besides, I know that there are inquiring minds that want to know how our big day went.

Last weekend I posted on fb about a little dilemma I was having to see if any of my mommy friends had any advice. I knew in my head what I thought needed to be done, but I figured I'd ask to see if anybody else had another perspective.

Problem: Braysen had been repeatedly trying to get out of his crib. One night last weekend my little monkey boy came scarily close to getting his little butt over the railing. So much so that I actually went in and rocked him to sleep. I rarely do this because #1: I don't want to get in the habit of doing this because he does a great job of putting himself to sleep and #2: He doesn't like to be rocked to sleep anymore. When I do try, I end up getting scratched, having my hair pulled, getting head-butted, you name it. He wants to be left alone so he can go to sleep. I don't blame him, I'm the same way.

So the majority of the responses I got were: he needs to be in a big-boy bed, which is the same thing I was thinking. I had so many people tell me that by 13-months, their little one was doing the same. It's not that I am ready for him to be in a toddler bed, but the fact that he could seriously hurt himself on the way down if he does get out of the crib that really freaks me out.

Soo, we ordered the toddler-bed guardrail for his bed. It came quickly and Tony and I put it on this morning. Well, I took the front of the crib off and then he put the guard rail on. What can I say, I'm impatient and wanted it done. :) Sometimes I find the only way to motivate him to do something is to start it myself. I start it, he gets mad and says I shouldn't be doing it, so then he takes over and finishes it. A lot of things work that way around this house: Christmas lights, yard work, taking out the trash, the list could go on.

Sidetracked, again, I know. We did a lot of practicing to get in and out of the bed. He's really good about getting on his tummy to climb down from things, I don't know if it is because it is so low to the ground, but for some reason, he wanted to step off the front of the bed like he would step out the back door.


I guess the first time he slept in it I cheated. He was already asleep when I laid him down in it. Braysen was really tired and fussy, so I was holding him while I was answering work emails. By the time Tony finished the bed, Braysen had fallen asleep (falling asleep while I'm holding him is not a usual occurrence).

For nap #2 today, that was the first time he had to actually put himself to sleep. Let me just say that it was an epic FAIL moment for mommy. We put a pillow on the ground in front of the opening so that if he fell trying to get out of bed he wouldn't hurt himself. I had the video monitor and sat right outside the bedroom door, just in case. He laid in bed, cried, got up, banged on the door, played a little, then climbed back into bed. Cool, I thought, he's just going to lay down and go to sleep. Wrong. He sat up and leaned way over the railing. I busted in the door, but before I could even get to him, he toppled over the railing, head-first. And wouldn't you know, he happened to hit the ground at the only spot that was not covered by the super huge pillow.

After checking him out to make sure he hadn't done any major damage, I fought with him for a half hour while rocking him and finally got him to sleep. 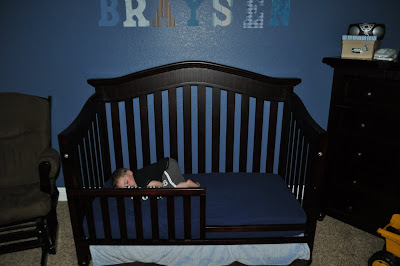 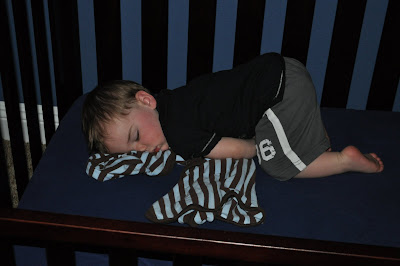 We practiced getting out of bed again after he got out of the tub tonight.

Tonight was no different. In the 10 minutes he was in his room, he pulled all the books off his book shelf, knocked over full Diaper Genie (twice), banged on the door, stuck his little fingers under the door, and climbed in and out of bed 6 times. The last time he climbed into the bed, he sat up and waved at the door. Then he leaned over the railing again. This time I was smart and put another pillow on that side, but I definitely wasn't willing to risk it.
I decided I wasn't going to rock him again. He needs to get used to staying and falling asleep in the bed. So I climbed in bed with him! Probably not the best choice because I don't know how I'll break him of that habit, but at the time, I didn't know what else to do. He was asleep within 10 minutes.
I will most likely be sleeping on his floor tonight. Just in case.