Cupcakes in a Jar

I've seen these cupcakes-in-a-jar on a few websites, but when I saw these ones a while back I completely fell in love with the idea and planned to make them for my fellow teachers for Teacher Appreciation Week. As it turns out, I didn't end up having enough time to make them.

So I made them this week instead! Jonathan and Carolyn had a "Meet the Baby" party for their little Kaleia, so I made some cupcakes-in-a-jar to take with me! I think they look much cuter in the taller jars from my inspiration, but I would need to put two cupcakes in each jar, and that just seemed like a lot of cake for somebody to eat in one sitting. So I opted for shorter jars. I think my favorite thing about these were how well they traveled, so much easier to transport than actual cupcakes! 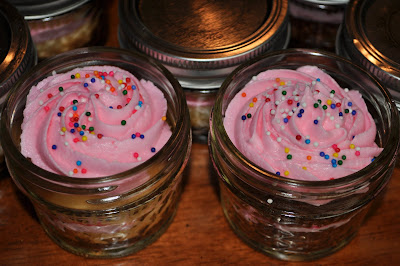 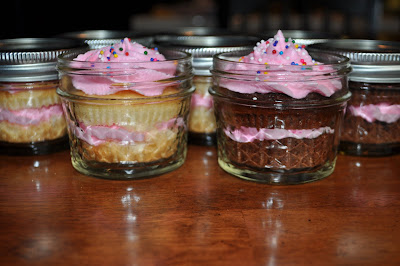 But I forgot to take a picture once all the lids were on. Oops! :)
Posted by Amy Schuler at 8:17 PM