22 weeks and we finally have some names for these babies! 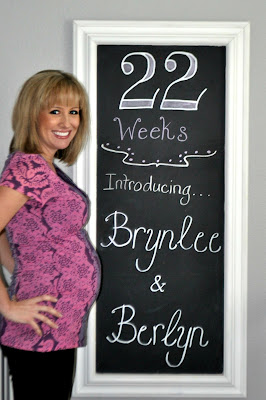 Naming Braysen was a nightmare. Long story short, Tony is super picky about names and I was an elementary teacher, so almost every name that came up reminded me of a student. That is how we ended up with such a different name for him.

Brynlee Jade
We actually had her name picked out LONG ago. This was the only name we could agree on for Braysen if he would have been a girl, so we decided we would use it if we ever had a girl (honestly thinking we would never have a girl).  I have since come across another little girl named Brynlee (with a different spelling), which was heartbreaking, but we decided to go with it anyway.

Berlyn Reese
It was never our intention to have all our kids' names start with the same letter, but somehow it happened. Tony has been rooting for this name from the get go. It was not at the top of my list but we have to compromise somewhere, right? This name was really important to him because his family is from Germany, so he was really pushing for the name, but spelled "Berlin". I compromised on the name, he compromised on the spelling. Works, right?

I saw the doctor on Friday and both babies are still doing fabulous.  They are both about a pound each (one is 16 oz and one is 15). They are growing evenly and are measuring just right, which is great news for mono-di twins! They have become a lot more active in the past week. It's so strange to have 2 of them in there, because at any point during the day, at least one of them is moving.