We had our 4D ultrasound done at a different place from where we did Braysen's.  We went twice to see Braysen in 4D and had a great experience both times. Our first visit with the twins did not go as well. Most of the ultrasound was done in 2D (which is silly because I get to see the babies in 2D every other week with my doc).  The pictures were not very good, and with what I came home with, I didn't really have anything to post. I emailed the owner of the facility, which is definitely not something that I normally would do, but my parents bought us the ultrasound as a Christmas gift. Maybe it was because it was money that somebody else paid. Whatever the reason, I emailed. The owner called me back and worked us in to redo the ultrasound. The second ultrasound went much better. The quality of the pictures is not as great as the ones I had done with Braysen because this facility gave me a printed copy that I had to scan, rather than a digital copy. 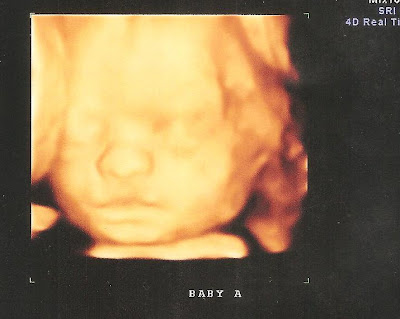 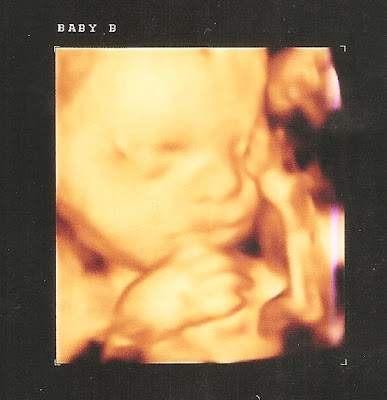 I think they look a lot like how Braysen looked at his 4D ultrasound. I did make a comment about how their noses look a little wider than Braysen's, but the tech reminded me that they are already quite squished in there and for some of the shots their noses are flattened because they are pressed up against the side of the sac. You can see this in this picture of Brynlee's nose. But if you look at Berlyn's nose, it doesn't look as wide because her head is at an angle and not pressed up against the sac.

Let's see if you can take a guess at which baby this might be, flipping the bird. 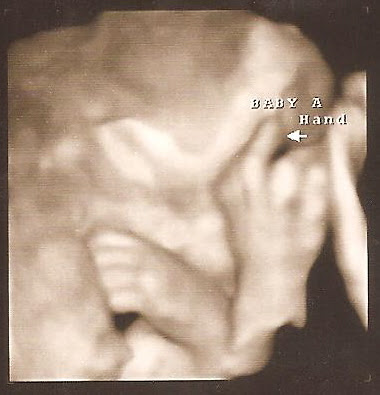 If you guess Brynlee then you would be correct! This child, I don't know what I'm going to do!

And the tech checked again. They are indeed girls.