I started this blog post a while ago, but never got around to finishing it. I can only imagine why! ;)

I loved seeing the "First Month Favorites" on other blogs. This list isn't twin-specific, but these are all items that I found very helpful in the first month. 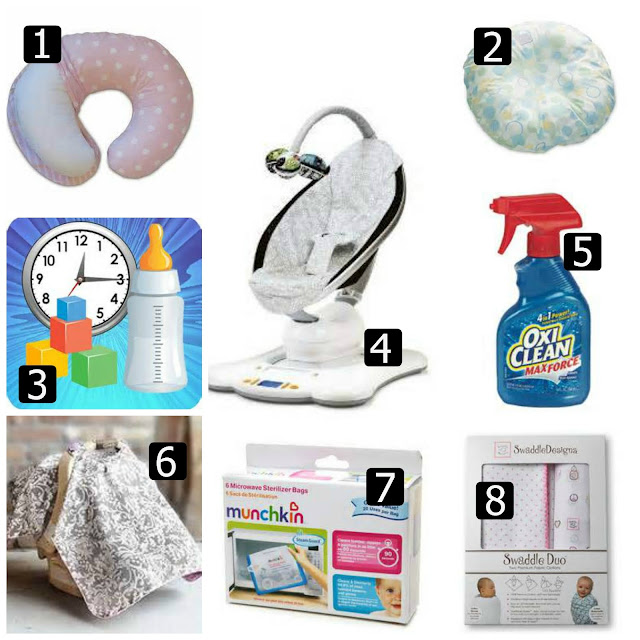 1. Boppy - We have two, one for each baby. When I occasionally bottle feed the babies to give them their vitamins or whatnot, I put one in each boppy and can hold a bottle for each of them at the same time. While it would be ideal to hold and feed one baby at a time, it's just not doable with another little one in the house. He needs my time too, so the Boppies have been a huge help with feeding time. I also use them occasionally for tummy time and the girls seem to like it.

2.Boppy Lounger - I loved this with Braysen and I still love it with the girls. When I first brought them home, they fit together on it perfectly. Now that they're getting a little bigger and more squirmy I don't use it as much for both of them, but it was perfect in those first few weeks. I still use it, but with just one baby at a time.

3. Baby Connect App - Hands down, the best iPhone baby tracker app I was able to find, especially for multiples. It allows you to track feedings (how much and how long), pumping (how much and how long), diaper changes, growth information, and so much more. It allows you to color code for each baby and you can track their info together or independently. It definitely has helped with keeping up with feedings. Coming home from the NICU, if the babies did not wake up on their own, I was supposed to wake them to eat every 3 hours, and this app allowed me to set an alarm to remind me. It also helped in the early days when I needed to really track input vs. output for my itty bitties and making sure they had enough wet/soiled diapers each day. I also had a friend who used it for her singleton baby and she loved it as well. Another great thing about it is that it can be synced with your iPad or other iPhones so if there is more than one caretaker they all can input information into the tracker

4. Mamaroo - Braysen hated his swing when he was a baby. I was certain at least one of these babies would fall in love with the Mamaroo. As it turns out, they both have. Brynlee was a little more hesitant at first, but now she loves it.  It has been like an extra set of hands for me when I'm trying to cook and have a fussy baby (or 2). It doesn't have the traditional swinging movement, it bounces and sways, much like mommies do when they try to calm down a fussy baby. Now if they only made one big enough to put Braysen in for when he is grumpy and wants to be held. ;)

5. Oxi Clean - I should have bought stock in this company! Braysen rarely had leaky diapers, I think maybe one or two total. These girls were having blowouts at least once or twice a day each, no matter how often I changed them. I just sprayed this on the stains as soon as they happened, let it sit for a minutes, then rubbed the fabric on itself, throw it into the wash, and the stains came right out! I have since changed the brand of diapers we use on them and the leakage has stopped.

6. Carseat Canopy - This has become very useful when I take the girls out in public. Having twins is like your own personal freak show. Any time I take them out and about I am stopped multiple times. A one hour trip to Target turns into a three hour ordeal. Every person that stops me either wants to see them or wants to tell me about every set of twins they have ever known. It's hilarious. Anyway, I put these canopies on the girls' carseats to keep them covered in public and to keep people's hands off my babes! The best part is that they often offer huge discounts if you join their mailing list. You can get the canopy almost for free, but they charge a bit to ship, which is where they get ya. I got both of these for about $40 once I paid to have them embroidered and for shipping.

7. Munchkin Microwave Sterilizer Bags - I cannot believe that I ever boiled things to sterilize them with Braysen. These bags get popped in the microwave and sterilize bottle and pump parts in about a minute and a half! The best part is that each bag can be used as many as 20 times, and there are check boxes on the side of the bag to mark off how many times it's been used. Genius.

8. Swaddle Designs Swaddlers - With Braysen I used Swaddle Me swaddles, but they have been way too big for the girls. I received these swaddles as a shower gift and they are amazing. I don't own any of the Aden + Anais swaddles, but I think they are very similar. They are lightweight enough that I don't worry about putting the babies to bed swaddled when it is 80 degrees in my house. Yes, it's April and it's already that warm. They are also pretty large and fairly thin, so it is easy to get a pretty tight swaddle with them. Berlyn stays swaddled nicely but my little Houdini Brynlee somehow always finds a way to break an arm or two free.